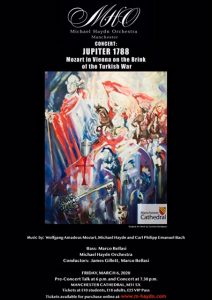 We’re very grateful to our interim Musical Director, James Gillett, for keeping us up to the mark while we recruit a permanent director. And all the more so because he’s clearly got more than one string to his bow. On Friday 6 March he’ll conduct the Michael Haydn Orchestra in a concert entitled Jupiter 1788: Mozart in Vienna on the Brink of the Turkish War. Tickets are available on-line at www.m-hadyn.com.

First things first, though. Tonight James will guide us through several movements of the Rachmaninoff Vespers. We’ll also revise a couple of movements from the Mozart Vespers. So, we’ll certainly make full use of our extended rehearsal time.

The last two of our musical director auditions last night. Now there’ll be time for choir members to pitch in with their views before the selection panel finally decide.

Half term break next week, but we’ll extend rehearsals after that by half an hour to 9:30pm so that we can get to grips with the Rachmaninoff.  There’ll be (only?) seven rehearsals left before the concert, but the scale and language of the Rachmaninoff, and the time we’ve spent on the Mozart during the auditions, demand extra rehearsal time from now on.

It’s a good job we’ve a Russian speaker in the choir! Looks like it’s going to be quite a challenge as it is, even though running through movements 1 and 6 last night gave us confidence that we’ll be up to it with a heap more coaching and our usual application.

Well, 14 people applied to be our Musical Director! And it was such a strong field that our selection panel has shortlisted seven of them.

Each shortlisted applicants is auditioning by rehearsing sections of Mozart’s Solemn Vespers with us for about 45 minutes, as well as being interviewed by the panel. The first auditions were on 21 January, with further ones on 28 January and 4 February. The panel will invite Members of the choir to indicate their preferences. It will take these into account when it makes its decision, which it hopes to do by the end of February.

So, exciting times for us, with a new musical director in the offing. But more immediately, after the last audition we’ll move on to start rehearsing the Rachmaninov Vespers – in Russian, of course. 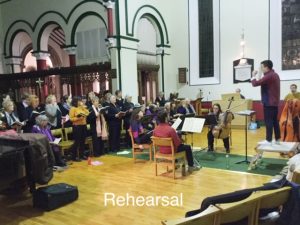 We’re grateful for appreciative comments from the audience at our concert last Tuesday, which more than repaid all our work in rehearsal.  As did the fact that almost 120 people braved exceptionally foul weather to come and hear us. Such an attendance enthused all of the musicians who took part. It also helped to keep our finances healthy to the tune of over £1000 which covered most of the costs of the concert.

And finally for 2019, Matthew Quinn’s parting message left us all with a warm glow: 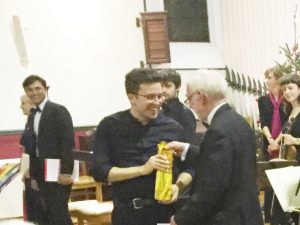 What an emotional day the concert was for me and how fabulous it’s been to work with the choir even just for a short time. I really did thoroughly enjoy coming to each and every rehearsal, and found the choir to be one of the warmest and most welcoming I’ve ever had the pleasure to conduct. The choir and committee have made this term remarkably easy in the face of a lot of personal change for me. I was absolutely humbled by the amount of people who made a point of coming up to me after the concert and thanking me for this term. It really did make such an impression on me and it’s always extremely gratifying as a conductor to find that you’ve made even a little bit of difference. So thank you so much for the most delightful term. I hope this isn’t the end of our relationship and that our paths will cross again.

And thanks again from the whole choir, Matthew.

We ran through the whole of the Durufle and Bach in our final rehearsal a couple of deays ago. It showed us that all our hard work has paid off and reinforced our confidence ahead of the concert. All that remains now is the final tune up with the soloists and ensemble immediately beforehand – and all of us remembering to bring the drinks and snacks that we’ll offer the audience at the interval.

Meanwhile, we’ve started getting applications for the role of musical director. In the New Year the committee will draw up a shortlist. That’ll keep’em busy on top of rehearsals from 7 January for the Mozart and Rachmaninov for our spring concert.

In August our musical director, Matthew, got a job as an Assistant Content Producer with the BBC in his home city of Belfast. He’s commuted from Belfast to take Tuesday rehearsals this term, but it’s proved difficult. We’re grateful to him for giving it a go – and to James Gillett for standing in on several occasions. James has kindly agreed to stand in until we find a permanent replacement to start in May 2020. Details are here: Musical Director needed

We know you can’t keep a good ‘un down, as Matthew has shown. Even so, we’d like someone who’ll be able to commit to at least two years with us. And meanwhile, .

Meanwhile, with Matthew we’re heading into final rehearsals for our concert on 10 December, enjoying the contrast between Bach and Durufle. Here’s the Poster.  The singing must go on!

And you can get tickets here: Tickets

We come together to enjoy singing and to entertain our audiences. But alongside such things that we want to do there are some that we have to do, like hold annual general meetings. These give all members of the choir chance to find out about its operation and finances, and its plans and ambitions.

This year’s was no exception. About half of the choir turned up half an hour early before rehearsal on 8 October to hear the good news. Our membership and audience numbers, and our finances are all healthy. So, it’s back to the singing and practising to ensure another successful year. 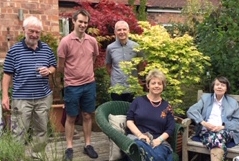 Aidan makes a final farewell at our garden party

As summer memories and shorts fade, we’re back at it revving up for our Christmas concert. A couple more new members, in addition to several who joined earlier in the year, has given us a timely boost – – but we’ve always got room for more.

Musical Director bows out on upbeat

Last night was Aidan Bradley’s final concert with us as Musical Director, although we may well call on him to play the French horn again we now he’s shown us how good he is. In an impromptu speech before a rousing performance of Zadok the Priest, Aidan thanked the choir for having been such a “blast”, praised its ambition and willingness to tackle challenging works Bach’s Mass in B minor.  Paul Bradbury, the chair of the choir, thanked Aidan for how far he had brought the choir in his six years with it, and for making rehearsals so pleasant as well as so productive.

As for the concert itself, an audience of over 80 enjoyed it throughout. Particular thanks are due to David Cane, baritone, who raced from Evensong at Manchester Cathedral to cover for mezzo soprano Mia Serracino-Inglott whom illness had prevented from performing.

So, now all that remains of our 2018-19 season is a choir garden party on Sunday, and another chance to reflect on Aidan’s contribution as well as to anticipate the arrival in September of our new musical director, Matthew Quinn.

We’re in the final straight now for this summer’s concert so it’s just as well that we’ve got the hang (mostly) of the harmonies and tempos in the Stravinsky. Listening to it a few more times should sort that out. Meanwhile, the Handel comes more easily, perhaps because some of it is familiar to several members of the choir, and we’re putting the finishing touches to the Mahler to wring every emotion out of it.

After the half term break we’re returning to rehearsal on Tuesday 4 with renewed relish, not least because it’s now only three weeks to the concert.

In addition, this will be Aidan Bradley’s last concert with us as musical director.  We’re set on giving him one last high point to remember along with all the others.

Matthew Quinn will join us as musical director from September. Several members of the choir have had singing lessons with Matthew since he took a couple of rehearsals last autumn when Aidan was away. To help him get to know the choir further,  and to offer choir members chance to shape programmes, we’ll be finding out choir members musical preferences and aspirations, and their ideas for improving the musical and social experience of being in the Philharmonic.

The Mozart Requiem went nearly as well as we’d hoped, and as ever we’ll sort out the few bits where it didn’t next time.

An audience of over 130 people helped to produce an exhilarating evening of music – and covered costs for the evening, including for the excellent soloists and instrumentalists who more than justified their fees.

We were delighted to be able to give £150 to the Motor Neurone Disease Association in memory of Muriel Clarke, a founder member who died recently.

The choir has decided to give all contributions for refreshments at the Spring concert to the Motor Neurone Disease Association in memory of Muriel Clarke, a founder member of the choir who died recently. Donations at her funeral went to the Association in memory of her father, Reginald, as she had requested. So, the choir feels that this is a fitting way to honour her memory and her contribution to the choir’s development.

Meanwhile, we are honing our performance for the concert. Last night specialist coaching by a staff member from the Collee of Music renewed our confidence in negotiating the French of Vieille Prière Bouddhique by Lili Boulanger – and revealed some vowel sounds we didn’t know existed.

As we head into the final rehearsals for our Spring Concert on 9 April, we are excited that a dozen new members have joined us since the New Year. The latest recruit turned up last night,  a very welcome additional bass. After joining us through the rehearsal, Andrew left with a CD of the bass part that another new member offered him.